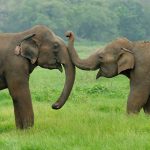 There are seven wells in a square shape. Wells are only 3–4 feet deep and you can clearly see the bottom. The temperature is considerably high but vary slightly from one spring to another

Hindu Temple. Koneswaram Temple or Tirukoneswaram Kovil is situated on top of Swami Rock. This temple is dedicated to the Hindu God Shiva,

The island is beautiful  rock pools with  white sands and glittering coral gardens norkelling almost as satisfying as diving, and it’s home to dozens of corals, hundreds of reef fish (including blacktip reef sharks) and turtles

You would be able to enjoy a great beach and Sea safari. Cruise leisurely in Southern highway early in the morning.

one of the extraordinary places to visit in Batticaloa to capture some beautiful pictures,, was built in 1913 and is 28 meters high

A walk to Elephant Rock, about 3 km South of Arugam Bay provides an appreciation of the extent of the beautiful beaches. In the early morning or evening we will have the sight of elephants roaming nearby.

Soft Sand, moon shaped curl it is home for famed break point that many regard as the best surf spot in the county; the epitome of the laid back beach scene that first drew surfers and sun seekers

You will be picked up from your hotel in Colombo city or Airport, by our chauffeur guide and commence the 11 days tour Sigirya, Trincomalee, Arugambay, Galle and Colombo with convenient round-trip transportation, you can relax on the transfers to and from Colombo.

Arrival (Airport to Negambo. – 7.8 Km – 20m ) After pickup from Airport transfer to Negambo Check in to your hotel and rest for a few hours before capturing the streets of Negombo on a city tour. You will visit the colonial remains of the Dutch period, a Buddhist temple, and a catholic church. You will get close to slow life in the local fishing villages; walk the lively fish market, and the bustling bazaar. Optional Boat trip through the Dutch canal, lagoon Overnight Accommodation Negambo - * Hotel

A totally free day with no plans. A free day for you to relax and enjoy the beach, to explore the surroundings on foot. Or Trincomalee Dolphin & Whale Watching Activities

Morning (Trincomalee to Batticaloa -131 k - 3h) Visit Batticaloa Lighthouse one of the extraordinary places to visit in Batticaloa to capture some beautiful pictures. You can take a boat trip around. Evening Batticaloa sightseeing Kallady Bridge & Hindu Temples. Overnight Accommodation - * Hotel in Batticaloa

Galle to - Airport - 150k - 2h) Check out any time today, or option to stay on a little while longer. Whichever you decide, our guides will be on hand to help out.