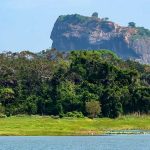 Explore the best of Sri Lanka this luxury trip includes star class hotel accommodation and these 2 days of your lives will be promisingly entertaining, exciting and full of new experiences. The tour covers a good range of historical places. In Chilaw Munneswaram temple, in Sigiriya historical UNESCO Site Sigiriya and in Dambulla UNESCO heritage Cave temple.

You will be picked up from your hotel in Colombo city or Airport, by our chauffeur guide and commence the two days tour to Mirissa Chilaw, Anuradhapura and Sigirya with convenient round-trip transportation, you can relax on the transfers to and from Colombo.

Arrival (Airport to Chillaw – 73 Km – 1h, 50min ) After pickup from Airport transfer to Chillaw will visit Munneswaram temple it has been in existence at least since 1000 CE popular Indian epic Rayamaya. Evening ( Chillaw to Anuradhapura - 130k - 2h, 30m) We will be visiting Anuradhapura the Historical city; Abhayagiri Dagoda and Ruwanweliseya stupa magnificent stupa were built by King Dutugamunu. Overnight Accommodation - Hotel at Anuradhapura

Morning (Anuradhapura to Sigiriya - 84 Km - 2h) After breakfast we will visiting Sigiriya Sri Lanka’s most famous landmarks - Lion Rock (known locally as Sigiriya Rock) a UNESCO world heritage site. Evening ( Sigiriya to Dambulla - 19km - 30m) will visit Dambulla cover temple; Dating back to the 1st century BC, this is the most impressive cave temple in Asia. It has five caves under a vast overhanging rock and transfers to Hotel in Colombo or Airport.