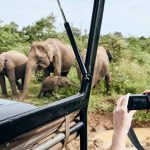 Explore the best of Sri Lanka this luxury itinerary includes star class hotel accommodation and these 3 days of your lives will be promisingly entertaining, exciting and full of new experiences. The tour covers a good range of places (Yala, Bentota and Hikkaduwa ) of your interest.

you would be able to enjoy a great beach and Sea safari. Cruise leisurely in Southern highway early in the morning

Turtle hatchery about the difference kinds of turtles, the injuries and risks they suffer in the oceans and how the sanctuary work to project,

You will be picked up from your hotel in Colombo city or Airport, by our chauffeur guide and commence the 3 days tour to beautiful Bentota, Hikkaduwa and Gall tour with convenient round-trip transportation, you can relax on the transfers to and from Colombo.

Morning:- Early Morning will be vesting to Mirissa Whale Watching Safari you would be able to enjoy a great beach and Sea safari. Evening: will be visiting Galle Dutch Fort and walk around the bustling city.
Overnight Accommodation - 3* Hotel

Morning: Vist kosgoda sea turtle hatchery about the different kinds of turtles, the injuries and risks they suffer in the oceans and how the sactuary work to project and transfer to Airport