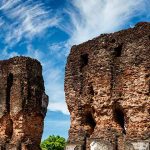 Explore the best of Sri Lanka this luxury itinerary includes star class hotel accommodation and these 7 days of your lives will be promisingly entertaining, exciting and full of new experiences. The tour covers a good range of places of your interest.

The Sri Lanka’s biggest vegetables market in Dambulla, site seeing through the City, the Dambulla Caves. Dating back to the 1st century BC, this is the most impressive cave temple in Asia. It has five caves under a vast overhanging rock, carved with a drip line to keep the interiors dry. In 1938 the architecture was embellished with arched colonnades and gabled entrances. Inside the caves, the ceilings are painted with intricate patterns of religious images following the contours of the rock.

The historic rock of the same name dominates the landscape of World Heritage-listed Sigiriya, where the steep and striking lava plug contains the ruins of an ancient empire. Built by King Kasyapa in the 5th century CE, the citadel that surrounds the main rock and its palace contains all the attractions in Sigiriya, ranging from cave frescoes and royal gardens to the ruins themselves. With an informative onsite museum, Sigiriya introduces visitors to ancient Sri Lankan art, town planning, and history.

Kandy is a large city in central Sri Lanka. It’s set on a plateau surrounded by mountains, which are home to tea plantations and biodiverse rainforest. The city’s heart is scenic Kandy  Lake, Gem Museum , Art & Craft

Sitting high up in the hills, the green and pleasant Nuwara Eliya offers both a rich history and proximity to pristine natural areas. Founded by a British explorer in the 19th century, the fledgling tea plantation town became popular with British growers and administrators thanks to its temperate climate. Well preserved and atmospheric, old colonial buildings and plantations provide a charming backdrop for tours of Nuwara Eliya.

Bentota is an ideally located beach resort with excellent facilities, and more importantly, glorious beaches. Explore corals, visit the turtle hatchery, enjoy the water-sports on offer and exhale with the magnificent sunset.

You will be picked up from your hotel in Colombo city or Airport, by our chauffeur guide and commence the 7 days tour to beautiful Tangle and Bentota tour with convenient round-trip transportation, you can relax on the transfers to and from Colombo.

Arrival (Airport to Dambulla – 145 Km – 3,1/2 hrs) the day we will be visiting the large vegetable market in Sri Lanka and Cove temple Dambulla and transfer to Hotel.
Overnight Accommodation - Jetwing Lake or similar

The morning after breakfast Explore corals, visit the turtle hatchery, enjoy the water-sports on offer and exhale with the magnificent sunset.
Overnight Accommodation - Pandanus Beach Resort & Spa or similar

Depart for the airport for your flight home.