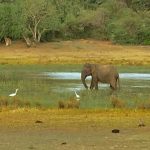 Wilpattu is a fairly thick dry zone jungle interspersed with a number of flood plain lakes banked with delicate white sands. It boasts an impressive variety of flora in huge expanses of forest, and varied wildlife, including deer, elephants, wild boar, sloth bears and leopards.

The park is 1,317 square kilometers (131, 693 hectares) and ranges from 0 to 152 meters above sea level. Nearly sixty lakes and tanks are found spread throughout Wilpattu. Wilpattu is the largest and one of the oldest National Parks in Sri Lanka. Wilpattu is among the top national parks world-renowned for its leopard population. Explore the west-coast of Sri Lanka has so many wonderful attractions to offer.

Wilpttu National park is among the oldest and most important of protected areas in Sri Lanka. It also contains a number of important cultural sites. The sanctuary lies inland from the coast and is entirely within Northern Province. Expanses of forest, and varied wildlife, including deer, elephants, wild boar, sloth bears and leopards.

Puttalam is a large town , North Western Province, it is known for energy production, salt, coconut production and fishing. It has one of the largest . salt producer in the country.

You will be picked up from your hotel in Colombo city or Airport, by our chauffeur guide and commence the day tour to Wilpattu National Park with convenient round-trip transportation, you can relax on the transfers to and from Colombo.

Arrival (Airport to Wilpattu -142km -3h ) After pickup from Airport our first stop will be Wilpattu National Park Explore the 4x4 jeep safari to see the local wildlife and learn about their biology and behavior through guided commentary.

(Wilpattu - Puttallam - 28km -37m) We proceed to Puttalam, which is a small but very populous town. Famous for salt and fishing, Puttalam is the home to one of Sri Lanka’s largest lagoons, We visit the salt factory