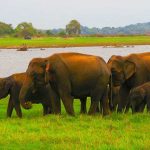 Puttalam is a large town, North Western Province, it is known for energy production, salt, coconut production and fishing. It has one of the largest . salt producer in the country.

Polonaruwa. This was medieval city in the ancient time as well as world heritage site declared by UNESCO 1982.

Was built during the reign of King Parakramabahu I, the central attraction of this shrine is the four stone Buddha statues carved out of a single slab

The island is beautiful  rock pools with  white sands and glittering coral gardens snorkeling almost as satisfying as diving, and it’s home to dozens of corals, hundreds of reef fish (including blacktip reef sharks) and turtles

Explore the best of Sri Lanka this luxury itinerary includes star class hotel accommodation and these 5 days of your lives will be promisingly entertaining, exciting, and full of new experiences. The tour covers a good range of places Anuradhapura, Polonnaruwa, Trincomalee, and Sigiriya of your interest.

Arrival (Airport to Anuradhapura – 188Km – 4h) After pickup from Airport first stop will be Munneswaram temple –chilaw ; Is an important temple for Hindu religion and proceed to Puttalam and visit salt factory after proceed to Anuradhapura is one of Sri Lanka’s ancient capital and visit Abhayagiri Dagaba, This is one of the most sacred Buddhist pilgrimage towns and extensive ruins in the world. Ruwanwelisaya Stupa is considered a marvel for its architectural qualities. Overnight accommodation - *Hotel in Giritale

Morning (Giritale to Polonnaruwa – 15km -19m) After breakfast we will visit the second most ancient of Sri Lankan’s kingdom Polonnaruwa their many places to visit moonstones, beautiful parks, massive buildings, and stunningly beautiful statues. The majestic King's Council Chamber, the Lotus Bath, the Lanka Thilaka Viharaya, the Gal Viharaya (rock temple), and the statue of one of Polonnaruwa's great kings, Parakramabahu, are a few of this capital's memorable sights. Evening (Polonnaruwa to Minneriya – 37km – 45m) after lunch we proceed to Minneriya. In Minneriya we start the Wildlife Safari in the Minneriya National Park. Overnight accommodation - * Hotel Giritale

Morning (Giritale to Trincomalee – 144km -2h) After breakfast we go to Trincomalee and visit the city, visit Fort Fredrick, Fort Fredrick is a fort built by Portuguese at Trincomalee, Visit the Hindu Temple on the big rock, we will visit the Hot Springs, A high wall assembles all the seven springs in a rectangular enclosure. Each enclosed in a dwarf wall forms a well of its own. The water is mildly hot the temperature varies but slightly in each. In effect, a public bathing resort. We will visit the Harbor at Overnight accommodation - * Hotel Trincomalee

After Breakfast we will visit Pigeon Island the island is beautiful rock pools with white sands and glittering coral gardens snorkeling almost as satisfying as diving, and it’s home to dozens of corals, hundreds of reef fish (including blacktip reef sharks) and turtles. Overnight accommodation - * Hotel Giritale

Morning (Giritale to Sigirya – 41km -51m) After breakfast we leaving for Sigiriya UNESCO heritage site (Lion's rock) is an ancient rock fortress and palace ruin, We start climbing the rock. After we are back from the top of the rock and you like it you can take a ride on an Elephant through the Jungle and relax at Overnight accommodation - * Hotel Giritale

Morning (Gritale to Dambulla -52km -1h) After Breakfast we proceed to Dambulla, see Sri Lanka’s biggest vegetable market in Dambulla, site seeing through the City, and proceed to the Dambulla Caves. Dating back to the 1st century BC, this is the most impressive cave temple in Asia. Evening (Dambulla to Airport – 130km, 3h) Drop off to Hotel in Colombo or Airport.